Impact of sowing time, hybrid and environmental conditions on the contamination of maize by emerging mycotoxins and fungal metabolites

Mycotoxins and other fungal metabolites represent the most insidious safety risks to cereal food and the feed chain. Optimising agronomic practices is one of the main strategies adopted to minimise the contents of these undesirable substances in grain-based commodities. The aim of this study was to investigate the effect of the combination of sowing times and hybrids on the occurrence of emerging mycotoxins and fungal metabolites in maize. Field experiments were carried out in 2 sowing times (early vs late) and 3 maize hybrids were compared in the 2014 and 2015 growing seasons. Overall, 37 fungal metabolites produced by Fusarium and Alternaria species were detected. Apart from fumonisins type B (FBs), other metabolites produced by Fusarium verticillioides and F. proliferatum, such as fumonisins type A, fusaric acid, bikaverin and fusaproliferin, were also detected in all of the samples. Fusarin C was found in 61% of the samples. Deoxynivalenol (DON), deoxynivalenol-3-glucoside, culmorin and zearalenone, all of which are produced prevalently by Fusarium graminearum and F. culmorum, were found in all the samples. Their contents were clearly affected by the meteorological trend: the highest contamination was detected in the 2014 growing season, which was characterised by abundant rainfall and lower temperatures from flowering to maize ripening. Among the mycotoxins produced by other Fusarium species, aurofusarin was found to clearly be associated with DON, while moniliformin and beauvericin followed the same behaviour as the FBs. A late sowing time significantly increased the FBs and fumonisin- associated mycotoxins in both growing seasons. The increase in contamination with the delay of sowing was more pronounced in the 2015 growing season, as the environmental conditions were less favourable to the infection of other Fusarium species. The effect of sowing time on DON and DON-associated mycotoxins produced conflicting results for the two growing seasons, because contamination by these metabolites depends more on the conditions that occur during maize flowering than those that occur during ripening. A clearer hybrid susceptibility was observed for these compounds. Other metabolites, such as enniatins, equisetin, T-2 and HT-2 toxins and Alternaria toxins, were always found in traces. The occurrence of these metabolites seems to be influenced less by the considered agronomic practices. The results, obtained under naturally-infected field conditions, underline the key role that the sowing date and hybrid susceptibility play in influencing, in a variable way, the contamination of mycotoxins produced by different Fusarium species in maize subjected to different meteorological conditions. The content of mycotoxins produced by Fusarium spp. section Liseola is more directly and steadily related to late sowing time, while the contamination of mycotoxins associated to Fusarium spp. section Discolor depend more strongly on the environmental conditions at maize flowering and on hybrid susceptibility.

This work is licensed under a Creative Commons Attribution-NonCommercial 4.0 International License.

FOR AUTHORS
FOR REVIEWERS
INDEXING
SCImago 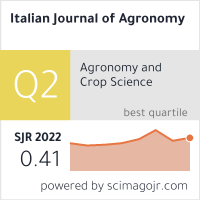 is the official journal of the Italian Society for Agronomy and it is published online by PAGEPress®, Pavia, Italy. All credits and honors to PKP for their OJS. Cover image by psdgraphics.com.